The concept of the layout :

A station, a loc shed, industry, ... in gauge 1, these are the themes w've alredy seen so much  that a change would be nice, something different.

We wanted a train riding through an environment with all the noises, sounds, light effects, were the landscape is more important than the train.

It would be a Swiss landscape as we have Swiss rolling stock.

A single track, electrified, through a landscape, somewhere between Switzerland and Italy.

We must not forget that catenary gives an extra dimension to the railway, a third dimension is added, It gives some more volume and above all it is so much more complex to build. It looks like just a stretched wire, but nothing could be further from the truth. Here it is still very simple, partly because it has to be transportable.
Another not unimportant detail is that catenary makes it possible to drive with the most modern rolling stock, an era that will appeal more to young people than the ever present imitation of an era that is already very far away, namely the 40s - 70s.

We would also like to bring depth to the landscape, which is why 1 module box was placed behind the others. This setup caused some problems, especially when we decided to put a road in front of the railway.

The side boxes became u-shaped, but the middle box could not get a fixed roof. That is why a kind of roof was made between the two side boxes.

Each box has its built-in lighting in the form of 1 RGB LED strip. This strip is located at the front of the box and faces the ceiling at an angle of approximately 45 degrees. This ceiling was previously covered with aluminum foil to better reflect the light. By chance, we discovered the polycarbonate sheets used in construction. These now form the heaven of the layout. I think that no solution is perfect for this, not even this one, but by using these plates we have no shadow on our layout.

Why a change of construction concept :

After 3 years of touring with our layout " Von Lingen nach Gefrees", we thought that a new layout concept was necessary.

We will build the layout in boxes that we simply connect one to another. Each box contains the landscape , background and lighting equipment. It is protected by another box that will serve as support to expose the layout in our club room and on exhibitions. These boxes protect our layout during transport and make it even possible to  put one box on top of another or put other layout parts on top of these boxes when this is required.

The dimensions of our boxes are :

This layout is mainly constructed with normal plywood. For the storage boxes we used poplar plywood, because this is much lighter. In the future we are only going to use poplar plywood. 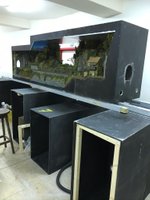 "Additional landscape" should be it :

When the layout was almost finished, apart from adding grass, shrubs and trees, we found that the track should actually be in the middle of the landscape. Now the track was only a few centimeters from the edge. That's why we decided to build 3 extra modules that would only consist of landscape. On a wide road we would later have cars driven by the satellite system of "GamesOn Track".

Below we show how we built those extra modules. As before, we also used "Low Expansion" PUR foam.
As far as lighting is concerned, the picture also shows that every 10cm, transparent silicone has been applied over the LED strip. This ensures that the LED strip also remains stuck, even if the double sided adhesive tape would come loose.

Positioning of the box behind the railroad

When the landscape is covered with acrylic caulk

third box : only the railroad

third box : the start of the landscape

Here the roof is inclined.

These are the new modules of the curve

The distance is for the new modules

This is the front plate

Positioning of the ALU bar

The ALU strip is necessary to cool the LEDs

LED strip in 45°angle directed towards the ceiling (covered with Alu-foil).

50cm of landscape in front of the track

Where to put the road ?

Closing the ceiling gap between the 2 exterior U-shaped modules

visual continuation of the waterfall

The track surrounded by landscape

PUR foam to form the landscape

Everything is covered with acrylic caulk

Left-over pieces of walls put together

First passing with the grassmaster

The color of the ground is painted dark brown

All acrylic caulk is painted in a dark browm, soil like colour

The color of the ground is painted dark brown

The road is made of concrete (filler)

Thickness of the road is apporx. 1cm

Part 7 and 8 will cover visual and sound effects and contruction of the graveyard.